The seniors have been gone a week and a half, but as usual the intensity of events at school have shifted up a notch.
Firstly, Tuesday was Diwali, and being a Hindu I made a huge batch of chole (chickpea curry) for a shared morning tea for the staff. 4 litres, all gone in the space of an hour or less... not forgetting all of the other food that people brought in as well. Phew. People enjoy sharing cultures at TC; one of the wonderful things about working there. 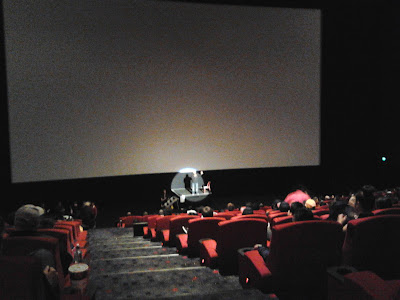 Wednesday was the annual Manaiakalani film festival, at Hoyts, Sylvia Park with the biggest screen in the southern hemisphere. And the students from the cluster are the big stars. Wow.
It has been a few years since the festival started at Hoyts, and we found out this year that they actually moved the GLOBAL release of the latest Twilight movie forward to allow us to still have the date we booked earlier in the year! Thanks must go to the cinema for honouring their commitment to us and a huge thanks to the movie company for being so understanding!
Having said that, our films are probably thousands of times better than Twilight anyway...
There were 4 daytime sessions and an evening session with over 50 films being screened during the event. Check out the videos here http://www.manaiakalani.org/film-festival/2011-film-festival/2012-film-festival especially "Water" by St Patricks; they use my classroom for the lab scene! The student presenters from some of the primary schools were incredibly confident stepping onto a stage in front of nearly 400 people to introduce their film. They really are incredible. This event is getting bigger and better every year.

Another turning point for me this week has been the introduction of Edmodo to my junior classes. It has gone  down very well as a collaborative tool, looks and works like Facebook and allows me the options of deleting silly messages and controlling who has access to my pages. My students have all taken to it really quickly and love it! There have been several of them not only answering my questions but creating questions for their peers. I can create badges for their profiles as well, which they find really cool.
Here is what my students thought:

More to come on this later in upcoming posts!
Posted by Unknown at 10:54 PM